A brief history of lifts.

Think of an elevator and the image that comes to mind is often a liftcar speeding up a towering glass skyscraper. If you try to imagine an older lift, perhaps you’ll think of an ornate metal gage in an Edwardian building. But lifts have been providing vertical transport for a lot longer than the past 100 years… Here’s a brief history of lifts to illustrate the ingenuity of previous eras.

While it might seem low tech compared to today’s ultra-fast elevators, the lift started out as a humble hoist, used as far back as the 3rd century BC by the ancient Greeks, operated by pulleys and winches. Vitruvius wrote that Greek mathematician Archimedes created a basic elevator in 236 BC using hoisting ropes wound around a drum, which was turned by manpower pushing a capstan.

In ancient Rome, the Colosseum used 24 lifts powered by hundreds of men to raise gladiators and their animal combatants to the the arena, travelling via vertical shafts from an underground network of rooms, animal pens and tunnels.

King Louis XV of France found vertical transportation a cunning way to ensure privacy from prying eyes. A ‘flying chair’ (in fact, it was a small cabinet) took one of his mistresses to her rooms on the third floor of the Palace of Versailles, and was later used by Madame de Pompadour. This early lift, created by Blaise-Henri Arnoult, was operated by a rope and used counterweights and pulleys. The occupant simply sat in the cabinet and used the rope to raise or lower it as needed. 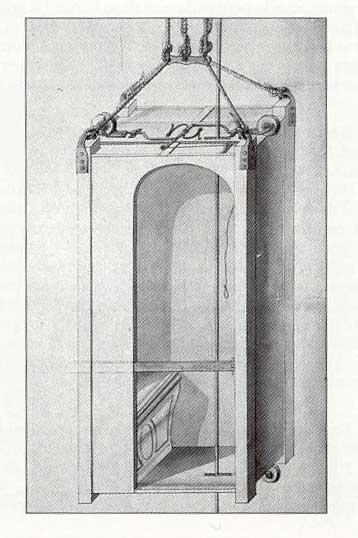 Meanwhile, a ‘flying table’ in the king’s Château de Choisy residence brought a ready-laid table up from the kitchen to the dining room, eliminating the need for disturbance by servants.

In Russia, from the late 1790s, screw-type lifts designed by mechanic and inventor Ivan Petrovich Kublin were used in the Winter Palace in Saint Petersburg and in the Arkhangelskoye Palace near Moscow.

Modern lifts came into being in the 1800s, beginning as steam-powered solutions and later becoming hydraulic systems. In warehouses, factories and mines, lifts took the strain out of transporting goods and people. 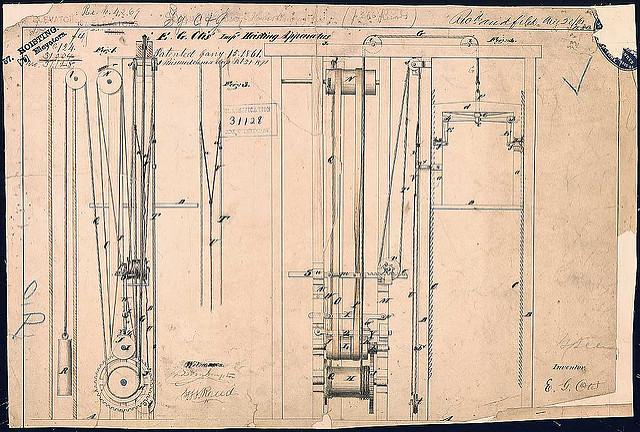 There was always a risk that supporting ropes or cables would snap, so Elisha Otis devised his famous ‘safety elevator’ design in 1852. This safeguarded workers from the danger of a falling platform should a hoist cable break by using a ratchet beam. And in 1857, he created a stir with the installation of the first passenger elevator, situated in a New York store and powered by steam – a novelty which drew in the crowds.

The manual ‘dumbwaiter’ became popular in the 1840s in the USA as a way to transport food from one floor to another. The simple mechanism involved a frame in a shaft, lowered by a rope on a pulley, which was guided by rails. A mechanical version was patented in 1883 and electric motors were widely used to power dumbwaiters by the 1920s.

In 1880, German inventor and industrialist Werner Von Siemens built the first lift to use electric traction, which he demonstrated at the Mannheim Pfalzgau exhibition. The lift had a motor mounted on the bottom of the cab, and used a gearing system to climb wall shafts which were fitted with racks. While the lift was a novelty, the design wasn’t sophisticated enough to challenge steam-driven, hydraulic lift technology.

The gamechanger for electric lifts came in 1902 with another Otis innovation – the gearless traction electric elevator, which combined electrical and mechanical subsystems. From 1906 to 1912, a number of new high-rise buildings of 46 storeys or more were built in New York with lifts an intrinsic part of the design.

Terrifying or thrilling to use, depending on your point of view, the paternoster lift, so called for its resemblance to rosary beads, dates back to the 1860s. It was originally known as the cyclic elevator before the term paternoster was adopted – the first two words of the Lord’s Prayer. Stepping into or out of a paternoster lift was something of a leap of faith, as the lift continued to move all the while.

Paternosters became particularly popular in the 1950s and 1960s and could often be found in university buildings, although new paternosters were banned in the UK from 1974. A 1989 paternoster accident at Newcastle University' caused an 18-month close-down of all UK paternosters. A detailed safety review of all UK models followed, and extra safety measures were fitted to those lifts that weren’t replaced by traditional lifts.

Most paternosters have now been closed, but you can see this unique lift type in action in this video from the BBC.

To find out more about ingenious and spectacular lifts, download our ebook 10 Unusual Elevators: Amazing Lift Design from Around the World.